a story from Paul Groves

“There’s only so much you can do to describe electrons and protons with your hands, but if you can share the ideas with images, that’s what helps students develop the right conceptual models.”

Ask any first grader what they want to do when they grow up, and you’re sure to get an answer. Just a few years into life, they’re already aware of the possibilities. Judging by the number people pursuing gainful employment as astronauts, it’s an answer that typically evolves over time. But some people seem to have always known exactly what they wanted to do. Paul Groves discovered his calling early. “I remember really clearly deciding that I wanted to be a teacher back in fifth grade. When I had chemistry in high school, I said, ‘ok, this is it. This is what I want to teach.’”

Groves headed to Stanford to study the physical sciences, with a teaching career in mind, and discovered computer programming in the process. He graduated college just as Apple computer was getting started a few miles down the road, and found a job teaching chemistry, as planned. After noticing his students struggling to grasp certain chemistry concepts, he began a side project developing chemistry simulation software for the first Apple computers. That sort of initiative has been a trademark of Groves’ career, now nearly 40 years in the making.

“I always liked explaining ideas to people. Chemistry makes a lot of sense to me. I have a good mental model of how chemistry works, and I just try to get that model across to students. When you’re talking, there’s only so much you can do to describe electrons and protons with your hands, but if you can share the ideas with images, that’s what helps students develop the right conceptual models.”

Groves continues to innovate in his classroom at South Pasadena High School in southern California, always in pursuit of helping more students reach the aha moment. iPads now take the place of the Apple II’s he used in his early days, but his purpose for the technology in his classroom hasn’t changed. It’s all about helping students visualize what’s going on at the atomic level. 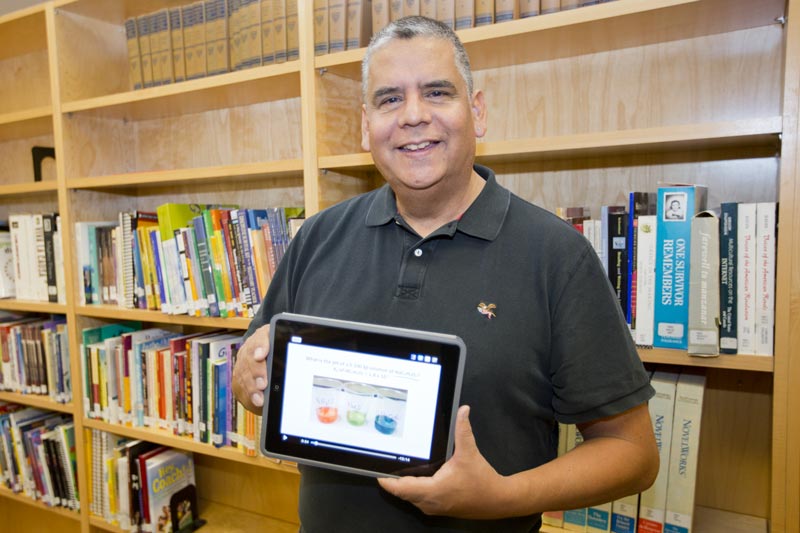 Once a year, Groves convenes with 250 other chemistry fanatics who travel from all across the country to spend 7 hours a day for a solid week grading thousands of chemistry exams. They form the AP chemistry test grading committee, and Groves has been involved in one way or another since 1983.

A couple years ago, he was discussing with another member of the grading committee ways to visually present chemistry concepts to students. His colleague recommended Educreations. “I went home and opened it up and said, ‘ok, this is easy.‘ I started using it right away. I created my first tutorial on electron configurations, which is something that students need to see over and over before it clicks. It was a lot of fun, and very easy to use. That’s the thing about Educreations, it’s really simple to make it work.”

For Groves, making video tutorials for students is an investment that pays dividends over time. “I don’t do a flipped classroom, I have a traditional classroom. But students will ask me to make a tutorial about something, and I can just sit down and make one and post it, and then it’s available forever. In AP chemistry, some of the concepts are pretty complex. You need to hear the concepts explained more than once.”

He likes that the videos save him time, while providing his students with anytime instruction. “It provides a library of support for students. If they need to go back and see these ideas again, they can, rather than coming in and asking me to explain it over and over again. What students like about that is being able to go over it on their own until it makes sense to them. They’re more in control of the presentation of the information.”

Who knows what magical device the folks in Cupertino will think of next, but when they do, you can bet Paul Groves will use it to help a new generation of students comprehend the world around them at the most fundamental level.

“It’s a lot of fun, and very easy to use. That’s the thing about Educreations, it’s really simple to make it work.”

How are you using Educreations?

We'd love to hear your story.